The working of the AQwaVit® Water Vitaliser has been tested scientifically in several ways.

At Ghent University a double-blind test was conducted with thirty students. The object was to discover if the taste of the water genuinely changes by using the AQwaVit® Water Vitaliser.

The students were split into three groups:

The students were asked if they tasted a difference between the two types of water.

70% of the people who had drunk the water treated with the AQwaVit® Water Vitaliser noticed a difference.

The object of this test was to see if the growth of soy beans was influenced by the use of water treated with the AQwaVit® Water Vitaliser. This test was also performed at Ghent University.

The test began with 50 soy seeds and was continued until the plants were full-grown.

The soy seeds were watered daily and the number of sprouts bigger than 3 cm were counted.

We can therefore conclude that the treated water had a positive influence on the growth of the soy beans. 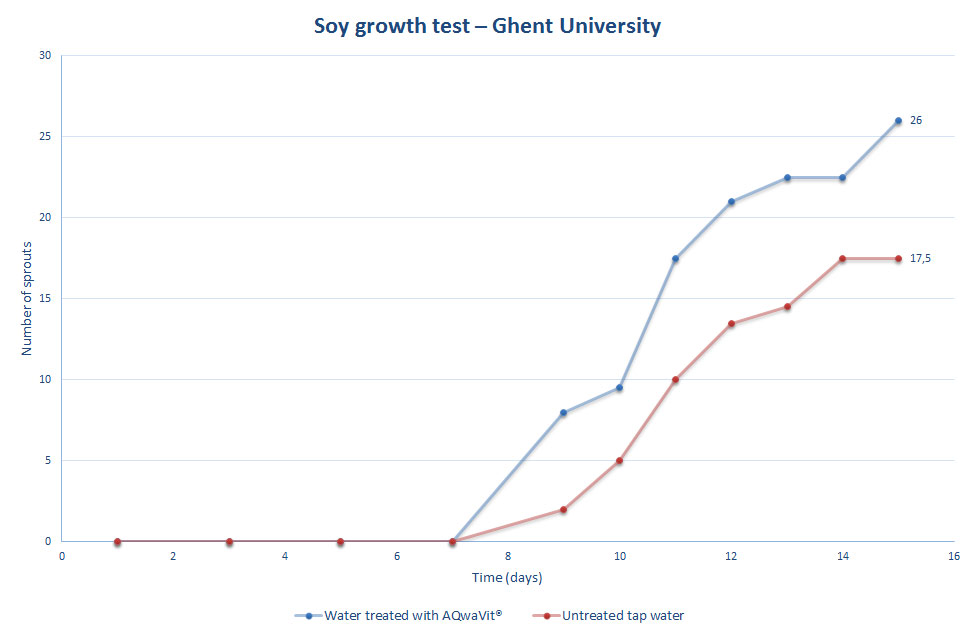 The purpose of this test was to see if the amount of lime scale in the water is reduced with the use of the AQwaVit® Water Vitaliser. This test was also performed at the University of Gent.
Two beakers were filled with 500 ml of water:

In each of the beakers 2g CaCO3 (calcium carbonate or lime) was added. In the beakers containing water and lime a number of copper plates were placed. Then the beakers were put into an oven at 110ºC for 16 hours. After this time the amount of lime scale on the copper plates was determined.

The photo shows the difference in lime scale in water treated with the AQwaVit® Water Vitaliser (A) en and untreated water (B).

DThe average weight gain caused by lime scale in the treated water was 0.1 g as opposed to 0.4 g in the untreated water. This means that the lime scale was reduced by 75% by using the AQwaVit® Water Vitaliser. 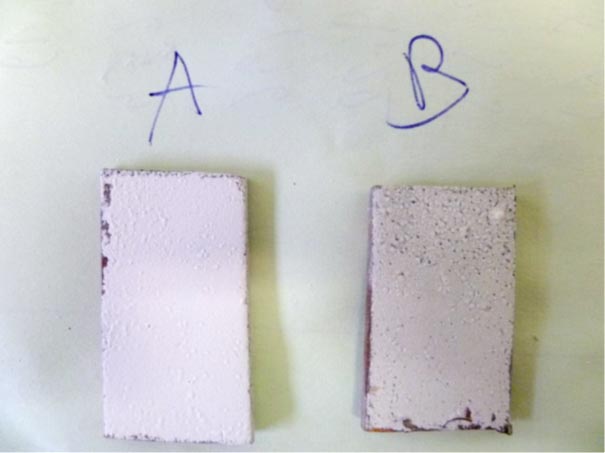 A test was carried out at the Institute for Bioelectrophotonics in Würzburg (Germany) with the purpose to detect any other measurable differences between untreated water and water treated with the AQwaVit® Water Vitaliser.

‘The statistical comparison test for both samples shows that they are statistically significant different. Sample 1 has a higher average intensity of the plasma discharge as compared to sample 2. Two different methods for statistical comparison come to the same conclusion. A higher intensity in the plasma discharge for the resonance method is linked to a higher amount of free electrons being available during the measurement.’

There is a statistically significant difference between the treated and untreated water, with a greater number of free electrons in the water treated with the AQwaVit® Water Vitaliser.

The presence of more free electrons is associated with an anti-oxidant working. An anti-oxidant is able to neutralize free radicals. These are unstable atoms or molecules that create damage in healthy cells.

Any cookies that may not be particularly necessary for the website to function and is used specifically to collect user personal data via analytics, ads, other embedded contents are termed as non-necessary cookies. It is mandatory to procure user consent prior to running these cookies on your website.